By Lori Yelton, Nutritionist at Michigan Department of Agriculture and Rural Development

Celery is known for its crunchy, tasty stalks and can be a great way to incorporate local food into institutional meals.

Among Michigan’s substantial agriculture industry, celery is a leader! Michigan is one of the top three states in the nation for celery production, with a combined 1,900 acres providing 119 million pounds annually, valued at 18.6 million dollars in 2016. Michigan celery production started in Kalamazoo, which once earned it the nickname of ‘Celery City,’ but is now produced all throughout the southwest counties of the state.

Visiting a farm is a great way to see firsthand how Michigan’s fresh produce fits on your menu. At the 2018 Michigan Department of Education (MDE) and School Nutrition Association of Michigan (SNAM) Annual Nutrition Conference, Cultivate Michigan hosted a farm tour to connect school food service directors with local growers. One tour stop included the Eding Brothers Celery Farm in Hamilton, Michigan. Mike Eding, a fourth-generation family farmer, provided details of how celery is grown, harvested, and distributed. Eding Brothers Celery Farm grows approximately 167 acres of celery each year in an area of Michigan where dark, fertile ‘muck’ soil is available. The farm’s muck soil is former swampland and river bottom. It is particularly rich in organic material and retains water, which is essential for celery production. 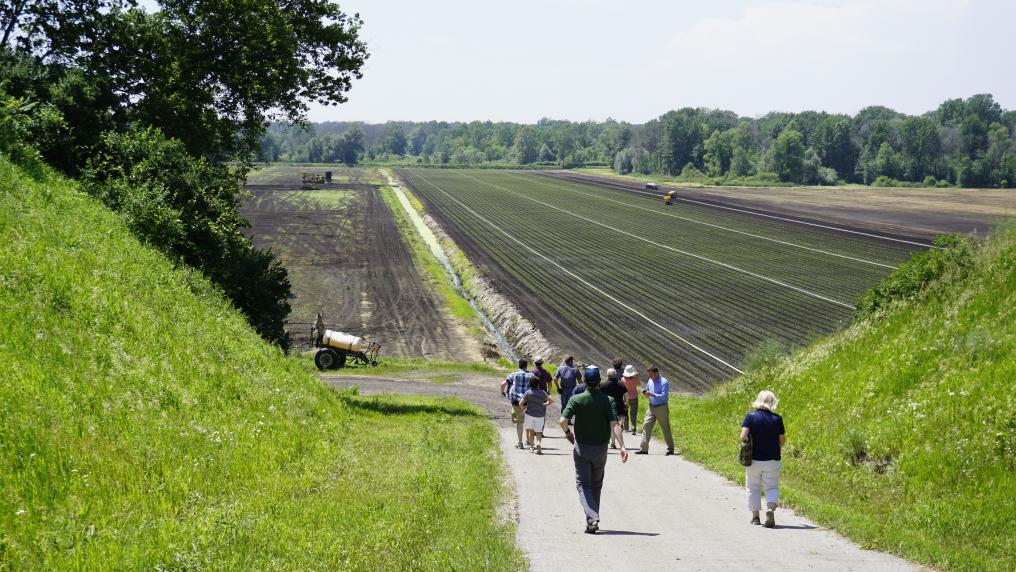 The tour took participants downhill into the muck soil where celery was being transplanted. Mike noted that due to Michigan’s cold winter, celery does not start from seed in the fields. Seeding begins in February in a greenhouse and young plants are transplanted into the fields beginning in late April, when the ground is 50°F and the night temperatures stay above 40°F. Harvesting of the first transplants begins in late June or early July, with the last transplants harvested through late October.

Celery plants are susceptible to diseases and insects, so the farm utilizes scouts to monitor the plants during the growing season. These professional scouts come to the farm two times a week to assess the plants and pest and disease pressures, and then make recommendations for prevention and treatment. This allows the farmers to only treat when necessary and minimize the environmental impacts when doing so. When celery is harvested it is tagged with the farm name, the field where it was grown, and the date harvested, allowing easy traceability.

Celery is a versatile vegetable eaten raw or as an ingredient in many dishes. To keep celery crisp, it must be chilled immediately after harvesting. This crunchy vegetable is enjoyed fresh in salads or as a snack. Chopped celery, whether fresh or frozen, can be added to soups or casseroles. Celery is low in calories and a source of dietary fiber, potassium, and vitamins A and C. Offering celery as a vegetable option in school lunches may increase vegetable intake. Researchers at Cornell University with the Smarter Lunchrooms Movement found that when students were given a choice between carrots and celery students ate 91% of the vegetables taken compared to 69% when carrots alone were offered.

Schools and institutions looking for Michigan celery for their menus should check the packaging. Eding Brothers Celery Farm sends a great amount of their harvested celery to Superior Foods Company, located in Grand Rapids, for sales and distribution. Schools can identify Eding Brothers Celery on the packaging of Superior Foods Company products. Other celery harvested by Eding Brothers goes to Michigan Freeze Pack in Hart for slicing, dicing and to be added to soups. The Michigan Celery Cooperative reports that their farmers have long-standing relationships with Pearson Foods Corporation of Grand Rapids and Gordon Food Service of Wyoming, MI for distributing celery to Michigan schools. To find more ways you can incorporate Michigan celery into institutional meals, check out the Cultivate Michigan Sourcing Guide this fall when celery will be our Cultivate Michigan featured food.