Prepared in chili or featured in the salad bar, Michigan school food service directors are getting creative with how they incorporate beans on the school menu. The class of plants beans belong to—legumes—are mandated by federal and state law to be in school lunch menus at least twice a week.1 Beans are rich in protein and fiber, but low in fat and caloric content. Michigan is also the second largest dry bean producer in the United States, with twelve classes of beans available for purchase in Michigan year-round.2 Dry beans offer a major opportunity for school systems to serve a nutritious food sourced locally. MSU’s Bean Research Lab and Meat Lab, along with Chef Darren are determined to provide schools more options to reimagine the place of beans on the school food menu. 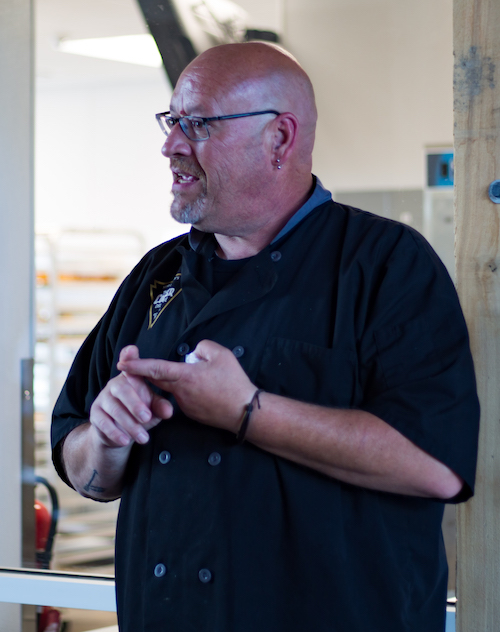 The dough in the ‘Samurai’ Cinnamon Rolls served for breakfast was made from ninety percent roasted otebo beans. Crispy on the outside, and doughy and soft on the inside, there was a hint of a bean flavor, though it was hard to tell at first. Chef Darren described how the recipe went through several versions before the tasty treat was ready.

At the MSU Bean Research Lab, the research of Dr. Karen Cichy and her team focuses on the genetic characterization of dry bean seed traits, and its relationship to consumer acceptance and nutritional quality. Dr. Cichy’s lab has developed prototypes of gluten-free dough and pasta made from ninety percent beans, tapioca starch, and gum. The roasted dark red and white kidney bean pasta in the Strozzapreti Arrabbiata, and the black bean spaghetti in the Spaghetti Crema Di Tonno were also made with the same recipe. Similar to the cinnamon rolls, the pasta and spaghetti had light bean flavors. Though not as smooth as grain pasta or spaghetti, both dishes garnered good feedback.

Following the pasta were blended beef and black bean Burger Sliders and Bacon Wrapped BBQ Hot Dogs. While there was no detectable bean taste, the addition of beans enriched the flavor profile of these traditional beef products. They were a hit with the crowd. Developed by Nick McCann and Noel Bielaczyc of the MSU Center for Regional Food Systems, working alongside the MSU Meat Lab, the blended meats are composed of lean ground beef, with twenty to fifty percent of the total product weight comprised of black beans. The goal of the blended meats project is to decrease the volume of meat needed to produce popular meat products, while introducing a healthier product at a similar price point or cheaper. Formulated to meet federal child nutrition standards and processed in a USDA-inspected plant, the reduction of meat lessens the environmental impact without compromising food safety or nutrition.

For the finale, Chef Darren presented the crowd with a platter of black bean Chocolate Mousse cream puffs. Participants excitedly loaded a cream puff onto their plates. Chewy, crispy, and sweet with a hint of bean—dessert was delicious and nutritious. The dishes featured on the Cultivate Michigan Bean tour demonstrate that beans don’t have to be restricted to salad bars or chili. With a little creativity, beans can remix our recipes and enhance other foods such as burgers or pasta.

For more information on where to source Michigan dry beans, check out our Cultivate Michigan Dry Beans Product Guide!